The mainstay of the Carmacks business, the Highways Division has worked on major urban roadways including P3 projects in Calgary, Edmonton and Regina, primary and secondary highways throughout Western Canada. 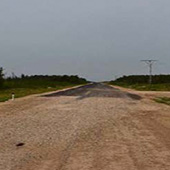 Wood Buffalo National Park is the largest National Park of Canada at 44,807 km². It is located in northeastern Alberta and the southern Northwest Territories. Larger in area than Switzerland, it is the second-largest national park in the world and home to the world’s largest free-roaming herd of Bison. 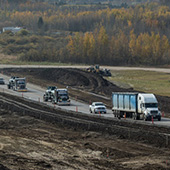 Hwy 28 Twinning – North of Gibbons to North of Redwater, AB

The scope of work for this 12.6-kilometer section of the twinning project involved excavation of 3,390,000m³, grading, 462,350 tonne GBC, 137,650 tonne ACP, construction of a temporary transition for northbound traffic, horizontal curve re-alignment, vehicle inspection station (VIS), signing, painting and erosion control measures. This $70 million contract had an accelerated schedule in an effort to complete the twinning of some 220 kilometers Hwy 63 by the fall of 2016.

Hwy 19 is a high volume, high load corridor connecting Hwy 2 from Nisku to Hwy 60 at Devon. The project involves twinning and widening 2.2 km of new roadway from 2 to 6 lanes. 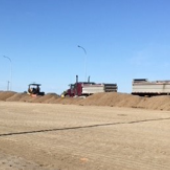 Work entailed construction of a truck staging area along the NBL of Hwy 36 along with bypass lanes in each direction. Grading was completed in Sept 2017 using supplied borrow sources. Aggregates were processed in December, 2017 using AT Option source. Work throughout winter included electrical and washroom facility building. Base and pave operations started in May, 2018 and were completed in early June, 2018. 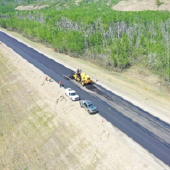